← Family Matters
Face Off with Inspiration →

I can’t say I’m 100% satisfied with my first attempt at replicating the worsted pocket nets for Uncle Gale’s old pool table, but it’s pretty close to what I’d hoped for.

As mentioned in the previous post, over at Ravelry.com we discussed several possible methods to try, but square knots won out when debbiepaa worked up a sample and posted a photo of it on Ravelry’s Techniques forum. She also suggested working it over a jar. It seems Robin’s guess was right: Macrame is the method of choice. Sort of. Well, my version of it, anyway.

Being inexperienced with macrame, I referred to some trusty old craft books and got started. First, I cut 34 strands of yarn, each roughly 45″ long, paired them off, doubled them up and slipped them onto a piece of wire:

...17 groups doubled onto the wire

Next,  I used the wire to secure it to an old jar: 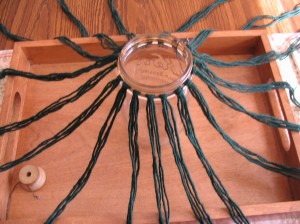 I tested a few different spacers to help keep the knots as uniform as possible. The goal was to make the new pockets slightly shorter than the old ones, since gravity and the weight of the pool balls will stretch the yarn over time. The double-pointed knitting needle I used on some test knots was too round, resulting in lop-sided knots.  A Popsicle stick, perhaps?

It fit the old pocket with a little room to spare, so it seemed like a good choice. I started knotting.

This is where the square knotting skills of my Eagle Scout brother or Cub Scout nephew would have come in handy. I kept a chart nearby to make sure I didn’t wrap the yarn backwards. I’m sure all the Scouts out there will cringe, but here goes: 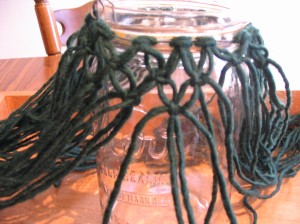 I soon realized the Popsicle stick was too rigid for working in the round, so I cut a thin piece of cardboard that could follow the curve of the jar a bit better.

'Round and 'round we go

After 10 rounds, it was time for the dreaded decreases. It only took about two seconds for me to realize that meant separating out the strands I needed for my next row of knots and working them row by row instead of around and ’round. Simple, huh?

Notice how two of the previous knot’s four strands are worked, and two aren’t? That’s to keep the diamond pattern intact. The same holds true for the left side decrease:

I decreased one knot per row simply by pulling back two strands on each side of each row, as shown above.

Bearing in mind that 1) I’m a horrible photographer, 2) I haven’t trimmed the un-worked strands (they might come in handy for attaching the pocket to the pool table’s pocket trim pieces), and 3) this is my first attempt…here’s the final result: 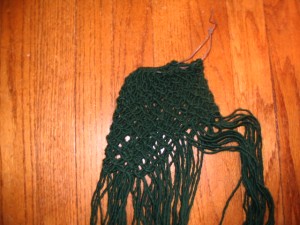 Over several decades, friction more or less had “felted” the fibers of the old nets (kind of like how your favorite sweater can “pill” after it’s been worn a few times), making it hard to distinguish one strand from another. Here, the separate strands are more obvious – as is the fact that not all of the knots are evenly balanced.

So what do you think? Be honest. I really want the new pocket nets to be as similar as possible to the old ones.

Any suggestions for a better spacer? (I fear the strips of cardboard will wear out before all six nets are made.)

If – after seeing this in person  – Mark thinks I’m on the right track, my plan is to make six additional pocket nets and let him keep this one – imperfections and all –as a spare.

I'm a full-time freelance writer with an addiction to yarn, cooking and all kinds of crafty things. I come from a long line of creative and entrepreneurial types on both sides of the family, making creativity almost like competitive pursuit.
View all posts by Paula Hendrickson »

← Family Matters
Face Off with Inspiration →

This site uses Akismet to reduce spam. Learn how your comment data is processed.

A family of four sharing the planning, execution and enjoyment of the family dinner

A Place for Plans, Dreams, and Commitment

a place to share knitting, crocheting, and spinning adventures

A Blog for Vampire Knits and Once Upon A Knit

The little boy, the snowglobe and all of television

Sleep All Day. Knit All Night.

We seriously heart crochet and love to promote patterns in UK terms!

The Art of Knitting

A Blog About Getting Back to Basics

For the Knit of It
Cook Up a Story

Inspiration and Recipes for Growing Families

Baking, living and all the rest

Adventures inside and outside my kitchen

In search of flavor

Passionate about cooking and baking and love to share.

Notes from Nowhere Near the Edge

Words on the Page