I always love trying something new or learning a new technique with each knitting project, but only last month did I finally get around to trying entrelac.

I’m not sure how to really describe it, other than the finished piece looks somewhat woven. That’s accomplished by working each “tier” in a different direction by picking up stitches and knitting others together. There’s a sense of immediate gratification with entrelac, since you’re sort of building it in blocks. It begins with a foundation tier of triangles, with the next tier being rectangles worked on one side, with the following tier going the opposite direction.

The pattern I chose, Entrelac Cowl by Marly Bird, was a great choice for my first attempt at entrelac.

It sounds complicated. Reading the pattern can be confusing. Fortunately, there was a You Tube video created for this very pattern. As soon as I saw it in action, everything clicked. Once that happens, you barely need to glance at the pattern because it simply repeats itself—one tier worked on the “right” (knitted) side, and the next worked on the “wrong” (purl) side.

Working the Entrelac Cowl in the round: Foundation triangles and two tiers of rectangles.

The coolest part? Using a yarn with long color changes really shows off the pattern. You don’t need an expensive hand-dyed yarn, either. I used Red Heart Boutique Unforgettable in “Dragonfly,” but you could use any brand or colorway.

I had so much fun making the cowl that I wanted to make another one, so I told my sister if she liked it she could have it. Here she’s wearing it down (you can also use it to cover your shoulders), and below she’s got it doubled up. (She even joked around by wrapping it around her neck and over her head. That might not look so cute, but it works if you don’t have a hat.) 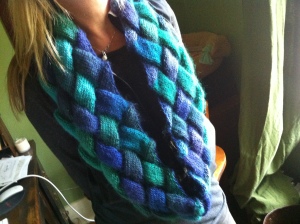 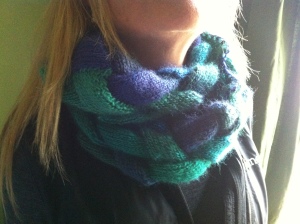 You guessed it. She liked the cowl. That means I’ll have to make a new one for myself—after the holiday knitting is done.

If you haven’t tried entrelac knitting before, don’t be intimidated. Give it a try!

What knitting techniques have you always wanted to try buy haven’t gotten around to yet?

A family of four sharing the planning, execution and enjoyment of the family dinner

A Place for Plans, Dreams, and Commitment

a place to share knitting, crocheting, and spinning adventures

A Blog for Vampire Knits and Once Upon A Knit

The little boy, the snowglobe and all of television

Sleep All Day. Knit All Night.

We seriously heart crochet and love to promote patterns in UK terms!

The Art of Knitting

A Blog About Getting Back to Basics

For the Knit of It
Cook Up a Story

Inspiration and Recipes for Growing Families

Baking, living and all the rest

Adventures inside and outside my kitchen

In search of flavor

Passionate about cooking and baking and love to share.

Notes from Nowhere Near the Edge

Words on the Page